When We Fell in Love – LaToya Jovena

Shares
I got my first library card in first grade. So my love affair with reading began then, it’s just that we’ve taken a few breaks.

One of the earliest books that made an impression on me was THE LUCKIEST GIRL by Beverly Cleary. As a kid growing up just outside of Washington D.C., sunny southern California felt like another planet. Reading the book made me feel like I was there amid the orange trees, heated by candles to protect them from frost when the temperature dropped.

Somewhere along the way my interest turned to fashion and reading fell by the wayside; until I stumbled upon FLYY GIRL by Omar Tyree in ninth grade. It was the first book I ever read that was about someone that looked like me, an African American teenage girl. But when you add in that the main character, Tracy Ellison, grew up in the city, and was obsessed with clothes, the effect became magnetic. Not only was I not alone, but I was understood. I was hooked. After reading all of Omar Tyree’s novels, I moved on to the works of Sister Souljah and Eric Jerome Dickey.

Reading became my release. My parents were super strict, so what I was allowed to watch and listen to was extremely limited; but even the most overbearing parents knew that a kid with a book is a kid that should be left alone.

There wasn’t much time for reading for pleasure in college, but I did find the time to write an awful, genreless novel as an attempted get rich quick scheme. I even sent it to a few agents, thankfully there were no takers.

After graduation, there was only occasional reading, and very little writing, while I devoted myself to a couple of modest goals–a good job with benefits and my own place. Then something amazing happened, after diligently working towards these goals I accomplished them. I had to start working towards something new.

The first was to catch up on reading, or as I called it, becoming ‘well-read.’ I read humorists like James Polster; and finished POST OFFICE by Charles Bukowski in a single day, while drunk on vodka with my husband playing Grand Theft Auto in the background. I think Bukowski would have been proud.

I soaked up classics by Herman Melville, Oscar Wilde, and James Baldwin, who showed me that trying to hide who you really are eventually destroys you, in GIOVANNI’S ROOM. Then I whizzed through mysteries and thrillers by Agatha Christie and Lisa Gardner. I read every Harlan Coben stand-alone novel and learned that not all trouble comes from the concrete jungle; sometimes you find it lurking behind the lush lawns and two car garages of the families in suburbia.

Eventually, reading wasn’t enough; it was like all the words I’d gobbled up were trapped inside of me. I had to start writing them down. But then, that wasn’t enough, I wanted to make people feel things and travel places. I needed readers. So I practiced my craft until it was good enough to share with others.

Perfecting the art has been the hardest part of this journey thus far, but I can’t give up now. It’s too late. I’ve already been bitten. Somewhere between the Amazon Rainforest, the Atlantic Ocean, and Victorian England I had passed the point of no return, and fallen in love with words. And after hours of painstaking work on my own writing, the only way to relax is to lose myself in the words of someone else’s carefully crafted creation.

LaToya Jovena lives in the DC suburbs with her family. She’s currently working on her novel while trying to be glamorous. Follow her on Twitter @LaToyaJovena. 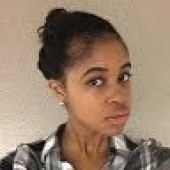 When We Fell In Love – Max Neely-Cohen

When We Fell In Love – Jane Vandenburgh

When We Fell In Love – David Gillham